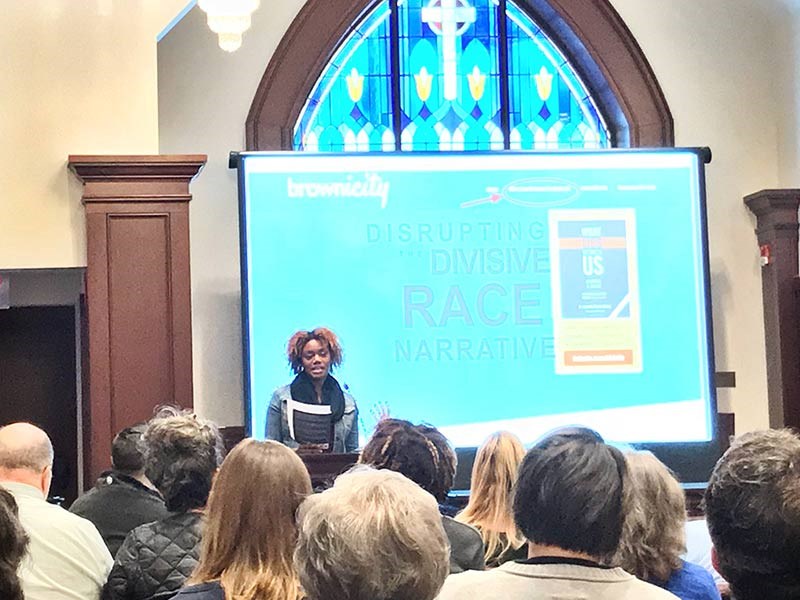 On a cold January day, I walked into Francis Chapel at Myers Park United Methodist Church ready to take on racism with a diverse group of 90 others from our church, including many involved with our Racial Reconciliation group, friends from South Tryon Community Church and others from the community.

In the five weeks that followed, we worked through the What LIES Between Us curriculum, from Brownicity facilitated by co-creator Dr. Lucretia Berry. Brownicity, pronounced like ‘ethnicity,’ is “a combination of the words ‘brown’ and ‘ethnicity.’ Brown represents melanin, the pigment we all have. Ethnicity refers to ‘that which we have in common.’ Essentially, we are all hues of brown.”  In the What LIES Between Us workbook, Dr. Berry explains, “This journey, grounded in Romans 12:2, is not about affirming an ‘I’m not a racist’ status. Instead, we gained a solid beginning to what will be a life-long journey of dismantling race/racism, a man-made construct that fundamentally opposes what God finds good, pleasing and complete.”

With hour and a half sessions on Sunday afternoons and two hours of homework each week, we uncovered the lies that the race narrative tells us. Through a compilation of video lessons, podcasts, TED talks, and articles, including one from Myers Park United Methodist Senior Minister Dr. Howell, we educated ourselves on the history of race in America, challenged assumptions of the biology of race, examined our own implicit bias, unpacked white privilege and explored the power dynamics involved in systemic racism.

We all come to a conversation on race with many opinions, many of which are unexamined and uneducated. This course is about giving people to the tools and resources to educate themselves on the realities of racism and empower them to recognize and combat it in their own communities. In the early weeks, we watched videos and listened to lectures to learn but in later weeks, we broke into small groups to discuss what we had learned together, with one rule. If you didn’t do the homework, you were only allowed to listen in small group discussions because the material is so transformational. Dr. Berry shared that you really can tell by the way a person spoke whether or not he or she had done the week’s work so they instituted the rule to keep the conversations on track.

One of my favorite moments of the class was a group activity entitled Sound of Love, led by Micaila Ayorinde Milburn-Thomas, one of the class facilitators. Together, the class brainstormed phrases of what would make the world a more beautiful place, what one thing brought us here to this workshop to weave together into a “soul song.”

Our larger group split into four groups each with a refrain – “understanding,” “equip to heal,” “fairness and equity,” and “for the future, for the children” - all underscored with the rhythm of a heartbeat. Once we got our rhythm, the facilitators started shouting disruptions, clanging cymbals, beating drums. After a second of shock, each group picked back up on their own refrain despite the distraction. We didn’t let the chaos drown out the message. As I realized what was happening, I blocked out everything but the words I had been tasked to sing, focusing intently on them and voices of those next to me singing the same thing. It was a powerful reminder that our steady voices speaking love and equality are most needed when the clanging of the world feels the loudest.

The final chapter is entitled “After Amen” and explores what we will do next – how we will “put feet to our prayers – to actively and intentionally create change.” It’s not an end, it’s a beginning of a journey to educate ourselves on the realities of racism and to take action against it, in our community, our social circles and in ourselves.

We ended each class with the following benediction: “May we be people of peace, with voices of hope, doing the hard work of love.”

Melissa McGill is the assistant director of communications at Myers Park UMC in Charlotte.