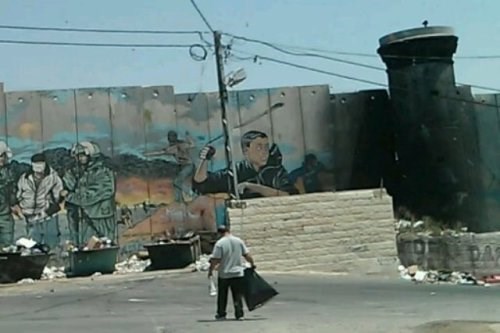 I’m in Bethlehem, Israel/Palestine. It’s been 10 years since I resigned from St Mark UMC, arriving here for the first time. I’ve been looking at emails I sent then. After being here only a few days, I email a mentor, Chip Webb, saying, “I get it. I understand what you’ve been trying to tell me of the Palestinian suffering.”  A couple weeks later I write a friend telling, “I’m ok, just trying to allow God to change me. I really sense this is why I was brought here.”

I find this amazing, that in a just a few weeks of arriving I sense that being in Palestine was more about changing me, than what I would do here. Yes, in 2007, and in the past 4.5 years, we’ve assisted many people, but in my experience, and my observation of others, the Divine is always more concerned with our spiritual growth than what we’re accomplishing.

I was here for six months then, it put me on a path that changed me, my theology and my life. I again found myself following a call here. In November 2012 I resigned from Hillsdale UMC, returning to Bethlehem full time (as visas allow). I’m thrilled I allowed the change, undoubtedly it’s the best thing that’s happened. But I wonder, I wonder had I known all that would change, all it would cost, would I had the courage? I really don’t think so.

Deconstruction is painful, especially when it’s our fundamental foundations – religion, politics, worldview, and ego. 10 years ago my perspective on these was quickly found inaccurate and inadequate. Had I only visited here for a week or two, it’s quite possible when returning to the states I could have dismissed the realities, forgot what I’d learned, ignored the pain in my heart, and not allowed the change. But I was here for six months. I couldn’t change the channel, click on another site, find a distraction, or ignore it. I was immersed. I was living it. And at times those six months were painful. Honestly, most of the time was, as I realized much of what I thought, much of what I believed was lacking. But it set me on a path for which I’m most grateful.

It’s been 10 years of unlearning, and 10 years learning to love better, to love more – God and people. To see God in everyone and everywhere. It’s still happening, and there’s more to come, as long as I allow it. It’s difficult to live in a crucible and not be changed. Although many do. It takes great pride, stubbornness and fear, it seems to me.

Unlearning and learning, while painful at times, has enabled me to connect with God, and humanity, at depths I’d never imagined. It’s available to us all, if we only allow it.

Kel Billings has served in pastoral roles of three WNCC Churches. In 2012 Kel started full-time with UMVIM serving in Bethlehem, Israel/Palestine with a humanitarian aid organization.  During 2015 he began assisting refugees in Jordan and Lesbos. Kel just returned from Lesvos, is currently in NC advocating for refugees. (Kel met the maximum length of service for UMVIM and now serves independently)
More at https://kelspath.wordpress.com/