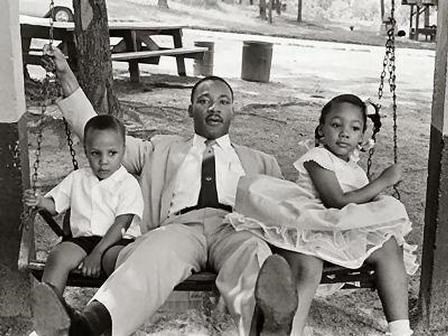 This past weekend we were remembering the life and work of the Reverend Dr. Martin Luther King, Jr. A hero of mine, here’s why - King wished to stay in Georgia and pastor a church, yet he felt nudged by God to do more. As we celebrate the man, his efforts and legacy, it’s important that we remember that the F.B.I. thought this follower of Christ to be a national threat.

Two days after Rev. King's so-called “I Have a Dream” speech, the F.B.I. wrote the following:

"In the light of King's powerful demagogic speech yesterday he stands head and shoulders above all other Negro leaders put together when it comes to influencing great masses of Negroes. We must mark him now, if we have not done so before, as the most dangerous Negro of the future in this Nation from the standpoint of communism, the Negro and national security." 1


In part of this speech Reverend King shared a dream: "I have a dream. I have a dream that my four little children will one day live in a nation where they will not be judged by the color of their skin but by the content of their character…

When we allow freedom to ring, when we let it ring from every village and every hamlet, from every state and every city, we will be able to speed up that day when all of God's children, black men and white men, Jews and Gentiles, Protestants and Catholics, will be able to join hands and sing in the words of the old ... spiritual, ‘Free at last! Free at last! Thank God Almighty, we are free at last!’"
Similarly, in the Bible, a guy named Paul, wrote, “There is neither Jew nor Gentile, neither slave nor free, neither male nor female, for you are all one [equal and connected] in Christ Jesus.”

Jesus said of himself, ‘The Spirit of the Lord is upon me, because he has anointed me to proclaim good news to the poor. He has sent to proclaim freedom for the prisoners and recovery of sight for the blind, to set the oppressed free, to proclaim the year of the Lord’s favor.’
It's clear that followers of Jesus are to be about freedom and equality for all.

I’m often writing from Palestine, where some perceive as dangerous, and it doesn’t escape me that the three I quote were killed by those protecting the status quo. Many followers of Jesus were killed. I was born into the Moravian Church on the anniversary of the day Roman Catholic Priest Jan Hus was killed in 1415 for seeking changes. His followers known as Hussites, evolved into the Moravian Church.

As a follower of Christ I must continually remind myself of his teachings which taught, and actions that demonstrate, when one empties/denies the false self we find fulfillment. In his book Falling Upward, Richard Rohr suggests that denying our false self – the self that’s created by our ego, culture and expectations of others. That by denying this, we find our true self, the one God truly created us to be (our gifts, skills, passions and heart). It’s ironic, difficult, and certainly counter-cultural. Yet totally worth it. My own experiences, and observations of others, support this.

I hope you had a significant MLK holiday.

Kel Billings has served in pastoral roles of three WNCC Churches. In 2012 Kel started full-time with UMVIM serving in Bethlehem, Israel/Palestine with a humanitarian aid organization.  During 2015 he began assisting refugees in Jordan and Lesbos. Kel just returned from Lesvos, is currently in NC advocating for refugees. (Kel met the maximum length of service for UMVIM and now serves independently)  More at https://kelspath.wordpress.com/