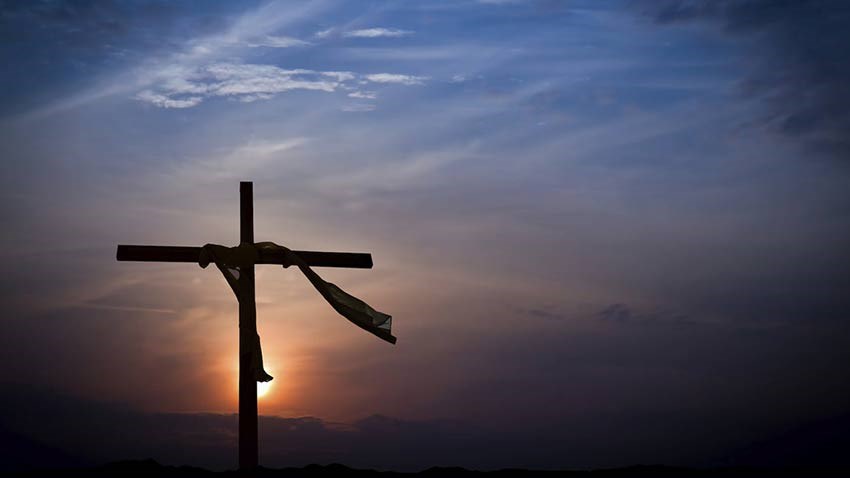 I think we need to look at Holy Week the same way our Jewish brothers and sisters look at Passover (which begins Good Friday). Passover, the celebration of God’s deliverance is not seen as a past event but as a present reality. The story celebrated is not about past ancestors. The celebration is about us as present participants. What if we looked at Holy Week the same way?

In many ways our Jewish brothers and sisters developed a Jesuit view of scripture long before there were Jesuits. I love the way Jesuits put themselves in the characters and stories of scripture to see what scripture has to say about their present circumstances and spiritual state. They ask what does scripture call forth in you?

Long ago, Saint Paul wrote these words to followers of Jesus who were a lot closer to the Jesus event than us. But the words are just as pertinent to us. Paul wrote.

“These are all warning markers – Danger! – in our history books written down so that we don’t repeat their mistakes. Our positions in the story are parallel – they are the beginning, we are the end – and we are just as capable of messing it up as they were. Don’t be so naïve and self-confident. You’re not exempt. You could fall on your face as easily as anyone else. Forget about self-confidence; it’s useless. Cultivate God-confidence.” (The Message 1 Corinthians 10:11-13)


So, what are the kinds of questions the characters of Holy Week ask us and what are our answers.

Caiaphas – the designated Chief Priest who said “it is better than one man die for the people rather than the whole nation be destroyed.” (John 11:50). Who are the innocents among us we will sell out for some perceived greater good of the whole? I think of all the innocents killed in gun violence where leaders will not seek common sense gun control because we want to preserve the support of the NRA and gun lobby.

I love how Peter Marty expressed this in a recent Christian Century article (March 14, 2018, page 3)) “We’re in golden calf country here, elevating a loyalty to the gun owner over a fidelity to God’s desire for abundant life. More than a hunting or safety device, the gun has become an object of reverence. We bow in devotion at its altar. ‘Sacred stuff resides in that wooden stock and blued steel,’ onetime NRA president Charlton Heston said. And when a gun becomes an idol, it demands loyalty even if it regularly disappoints. Like other small g gods that offer false consolation, a gun’s guarantee of ultimate safety and security is a myth.”

Did you know archeologist found Caiaphas’ sarcophagus? He died in wealth and standing, an aristocrat who preserved his position. By our culture’s standards he gambled wisely. Did he?

Of course, history gives a different view of Pilate than the gospels. History shows Pilate had no problem in killing hundreds of Jews who protested his entrance into Jerusalem because of the image of Caesar on the soldiers’ shields. Since Caesar was considered a god, this was blatant idolatry. With that kind of killing record what is one more death of an insignificant peasant Jews to Pilate. John Crossan says Pilate saw Jesus as a non-violent threat. His rationale for this is that Pilate didn’t execute Jesus’ followers. (page 9, How to Read the Bible and Still Be a Christian) Who do we see as insignificant where we don’t have to view them as human beings? Who do we see as expendable?

Peter – the impulsive disciple who is passionate but who covers his rear when the going gets tough by denying any association with Jesus. Where do we cover our rear when the going gets tough and leave Jesus hanging out there by himself? Where do our words say one thing and our actions something entirely different? At least Peter felt remorse when the cock crowed and he saw himself as he was. Do we feel remorse when we get such a view of ourselves?

Judas – it wasn’t about the money! 30 pieces of silver wasn’t worth much, so scholars speculate Judas having other motives. Was he trying to force Jesus hand? Had Judas become disillusioned when things didn’t turn out like he expected? Clarence Jordan calls Judas a “gut-busted” follower of Jesus because he was torn apart by competing loyalties. Where are we “gut-busted” Christians.

I always laugh at this church I pass on the way to the mountains. They have the American flag always above the Church flag. I always thought God is above nation and not subservient to nation? Is that a “gut-busted” church, unclear on who their ultimate loyalty goes too? How is that true of us? How is that true of our churches?

How is that still true in our churches that the women stick with Jesus and continue to witness to the resurrection? I think of the witness of the UMW and how women have shaped our social principles. What can we learn from the women about following Jesus?

The crowd – is always presented as being for Jesus on Palm Sunday and calling for his death on Good Friday. Maybe it is not so! Some scholars have tried to go back beyond the Greek to an Aramaic source. They would look to see where the Greek words had trouble fitting grammatically and then the difference the Aramaic words would make. They discovered that the crowd that cheered Jesus on Sunday in the Aramaic could be termed “the poor.” The crowd that called for Jesus” death in Aramaic could be termed “those nearby” the chief priests. And the crowd that wept when Jesus was led to crucifixion reverts back in the Aramaic again to “the poor.” In other words, the poor never abandoned Jesus.

What can the poor teach us today about sticking with Jesus? I work at an overnight shelter check in for the homeless on Sunday nights. What I have noticed among some of the homeless is how they look after each other. I notice how they will help each other. Is there a lesson here for us about the crowd?

Last – the character of Jesus himself. The garden scene is one of the best examples of trusting when you can’t see how it is all going to turn out. Probably the next best for me is Mary at the Annunciation. Obviously in Jesus the apple didn’t fall far from the tree. Jesus will trust God regardless of what comes; will trust when you can’t see. Is this the ultimate invitation of Holy Week to us? Will we trust like Jesus believing God can bring new life out of the worst? Maybe this is the only way we get to Easter?

“We live in a time of struggle between truth and lies; between sincerity, which almost no one believe in still, and hypocrisy and intrigue. Let’s not be afraid, brothers and sisters; let’s try to be sincere, to love truth; let’s try to model ourselves in Christ Jesus. It is time for us to have a great sense of selection, of discernment.”

HAVE A GOOD HOLY WEEK AND THE QUESTIONS HOLY WEEK BRINGS!

Duke Ison is a retired elder of the Western North Carolina who lives and does ministry in Winston-Salem, NC
Follow us on Instagram